As you burn through constant fusion,
Your twinkle’s just an optical illusion.
That happens when your light gets near;
distorted by our atmosphere.
Twinkle, twinkle little star,
spreading light and heat so far.

As you use up fuel you’ll grow,
and give off a scarlet glow;
Maybe you’ll go supernova,
exploding elements all over.
Now I know just what you are;
and I know I’m made of stars.

Where does the Sun get its energy?  A straightforward question but physicists struggled to find an answer until the 1920s, when Eddington suggested that nuclear fusion might be responsible.

In 1939, the German/American astrophysicist Hans Bethe proposed the solar fusion model we still use today.  There are different branches in the model, depending on the mass of the star.  Each has its own slightly different route to create helium from protons, releasing different quantities of energy in the process.  Bethe won the 1967 Nobel Prize for Physics; here is a summary of his work and a copy of the Nobel Prize award ceremony speech. 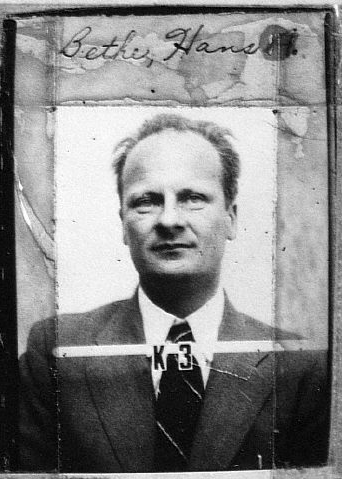 Bethe worked on the Manhatten Project at Los Alamos during World War II.  He later campaigned alongside Albert Einstein for an end to nuclear weapons.

The fusion process in our Sun is called proton-proton fusion and the three stages you need to know for this course are outlined in the diagram below.