These Bitesize pages will help if you need to recap on the basics of magnets.  A magnetic field is produced whenever current flows through a wire.  The magnetic field is represented by a series of concentric circles around the wire, as shown below. The direction of the arrows on these magnetic field lines is found using a left hand rule:

Hold out your right hand and make a fist like Batman.…BIF! Batman making a fist with his right hand. image: infinitehollywood.com

† if no field lines are shown, position your thumb so it points from N to S in the magnetic field

If you’ve done everything correctly, the fingers of your right hand will look like this. If you are working with positive particles, there are two options:

Try both methods and decide which is best for you.
If you opt to use different hands, make sure you know which hand to use for each type of charge. Why do we use B as the symbol for magnetic fields?  I have no idea, but there are some suggestions here.

An electric field can be used to accelerate charged particles.  Conservation of energy tells us that the work done by the field is equal to the change in the particle’s kinetic energy.  The speed of the particle can be determined if its charge and the accelerating voltage are known.  These notes show how to perform the calculation.

We’ve been looking at forces for the past two weeks. Here are some notes and videos to help you learn more about this topic.

Friction: here are 3 clips about friction from the BBC programme Bang goes the Theory 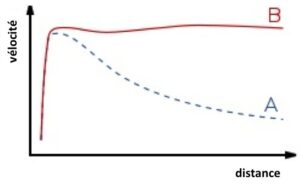 Zwicky had been looking at clusters of galaxies, rather than individual stars within galaxies.  He found something similar; the galaxies were swirling round at too great a speed and should fly apart.

You might remember that we looked at some paradoxes when we studied special relativity earlier this term.  Here is another situation where a paradox can arise.  The German astronomer Heinrich Olbers (1758–1840) asked why the night sky was dark.  At the time, astronomers believed that the Universe was both infinite and steady state (unchanging), so it seemed like a good question.

Watch these two videos and see how they chip away at the paradox and show how the answers to the question turn out to support the expanding Universe model.

As we worked through the diagram explaining the stages of the Big Bang model, we looked at a section of the diagram where the Universe was hot enough for nuclear fusion.  At this point, hydrogen nuclei were fusing together with other hydrogen nuclei to create helium nuclei.  As the Universe expanded, it cooled and further fusion was not possible.  As a result, we have a Universe with the same proportion of hydrogen to helium wherever we look: we find 75% hydrogen and 25 % helium.  This can only be the case if all of the helium was produced at the same place and the same time, i.e. in a very small, very hot Universe.

The CMBR was first detected in 1964 by Richard Woodrow Wilson and Arno Allan Penzias, who worked at Bell Laboratories in the USA.